A METEORITE THROUGH THIN ICE?

As I write this early in the morning in Florida, world stock markets have plummeted overnight, and it looks as if it will be the same in the U.S. -- at least at the opening.

I am not an investment advisor, and anything I write about stock markets is strictly for my own amusement and the entertainment of my readers. I do not suggest that you act on what I say.

I rely on a “technical” approach involving charts based on price and volume, and on various technical indicators, especially the MACD and the William%R.

It looks as if the U.S. market will plunge in panic selling this morning, which could be so extreme that it will lead soon to a “reversal” day, followed by a strong bounce up in prices.

The rebound will not necessarily mean that we've seen the bottom of this bear market, but it could mean a vigorous rise in prices for awhile – probably setting an even bigger bear trap than the one I pointed out a few days ago.

Of course stock prices could go straight on down through those support levels like a hot meteorite through thin ice, but if so, don't despair. No matter what happens to stocks and banks, we'll always have plenty of politicians!
Posted by Fleming at 7:46 AM 1 comment:

Will prices go up or down as we head into a recession or depression?

Should we prepare for inflation or for deflation? 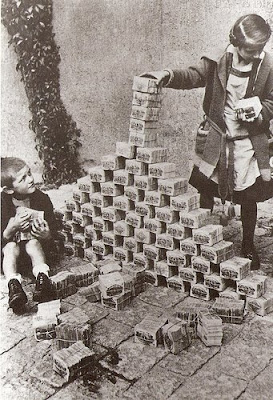 German Children Play with Money During the Great Inflation of the 1920's. Employees were paid daily or several times daily so they and their families could rush out and buy things before the money lost most of its buying power as prices skyrocketed.

Having cursorily researched expert opinion on the relationship between recessions and inflation and deflation, I can summarize the results as follows:

A recession may see either inflation (rising prices), or deflation (decreasing prices). Brilliant! Wikipedia: 'Recessions are the result of falling demand and may be associated with falling prices (deflation), or sharply rising prices (inflation) or a combination of rising prices and stagnant economic growth (stagflation).'

Armed with this lack of knowledge, I predict that despite the example of deflation during the Great Depression, we are entering a period of increasing inflation.

Logically, the economic collapse the United States is experiencing will result in loss of jobs, loss of spending power, and a surplus of goods over demand, which will lead sellers to slash the prices of refrigerators and television sets and automobiles in order to find buyers. So, prices will go down, right?

Yes, right in the near term for some items, but wrong in the longer term. The increase in the supply of money (combined with eventual decrease in production of cars, refrigerators, etc.) is the giant fly in the ointment. During the Great Depression the government let the money supply go down, but at present the government is creating money by the ocean-full and pumping it into banks virtually without limit. To my amateur eyes, this certainly looks like an unprecedented increase in the money supply which will drown any deflationary tendencies of the recession/depression.

The government's panicky efforts to make us borrow our way out of a crisis caused by borrowing will most likely result in a long-term tsunami of inflation. If production is decreasing, as we hear every day, then how can the supply of goods keep up with the supply of money? And when money supply grows in proportion to things for sale, the prices of things for sale go up. Even with the current financial malaise, most grocery items are “on sale” for far more than they were a year ago.

I would really appreciate some comments on the issues raised here. I want to know whether to buy a new refrigerator or a new car now, while desperate sellers are offering price-cutting sales, especially leading into Christmas, or whether I can get even better deals next year. I want to know whether to prepare for inflation by buying gold or gold mining stocks, or whether to prepare for a deflation in which “cash is king” by putting cash under the mattress.

I am betting on inflation and will be closely watching those sale prices to see if they go down or up.
Posted by Fleming at 9:22 AM No comments: 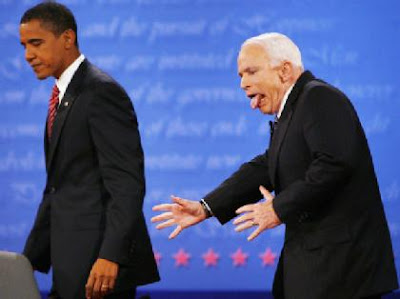 Come, Igor. We must stop this financial Frankenstein monster before it destroys the world.

I'm betting that the tremendous stock market gains of the past couple of days do not mark the bottom of this bear market, and that the current rally will turn into a “bear trap” for those who buy stocks and don't get out quickly.

I was shocked to read in interviews with several investment "experts" that they are as heavily into the market as ever (which means they must have lost 40% of their stake already), and are buying more now -- because stocks are "cheap." Well, $20 a share compared to $60 is cheap, but so will $8 a share be in comparison with $20.

As the market cliché goes, you can't turn an ocean liner around on a dime. Bear market rallies have a tendency to be swift and strong, but not to have staying power. I'm betting that the current hoorah of relief doesn't carry the Dow Jones Industrials up much past 11,000, if that. Then we shall see.
Posted by Fleming at 11:15 AM No comments:

MUST BORROWING MAKE THE WORLD GO ROUND?

'Neither a borrower nor a lender be;
For loan oft loses both itself and friend,
And borrowing dulls the edge of husbandry.'*


Revolutions bring revelations, and the first revelation which the current financial revolution brought to me was that the United States economic system is based on borrowing money.

I got the impression that few Americans have actual money and pay for things. All most people have are debts -- and their right to borrow money from “lending institutions” was equal to their right to life and liberty. The most drastic emergency actions were needed to preserve the right not to live within one's means!

I oversimplify, but simplicity is needed here. A secret of control of societies by huge financial institutions interwoven internationally is a camouflage of complexity which gives most people the helpless feeling that there is no possible way they can understand the system. For many intelligent people I've talked to, the mysteries of quantum physics are at least as fathomable as the workings of monetary and financial machinery. 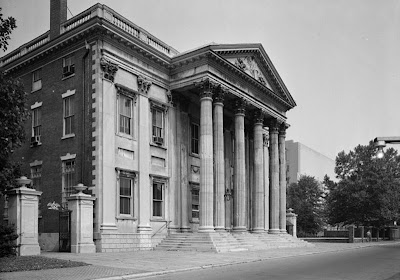 Banks Hide Reality Not Only Behind Impressive Facades, but Also Behind a Smokescreen of Complexity

Here's one simple question: Is it really to the advantage of society to encourage everybody to live on borrowed money? Can the answer be anything but “no” in light of the crash brought on by U.S. banks lending mortgage money to “subprime” borrowers (people with such bad “credit histories” that the odds were against their paying the money back)?

Why did banks loan massive amounts of money to “subprime” people who predictably might not repay it? A major reason is that America was excitedly inflating a housing bubble in which real estate rose in price weekly, and a house bought for $120,000 in March would sell for $200,000 a year later. Thus the banks enabled a subprime person to “buy” a house which the bank could take and sell at a profit if the mortgage payments weren't made. Meanwhile the bank could collect fancy fees as well as interest payments.

If a society based on borrowing is bad for society, then who benefits from it? The banks, of course. Never forget that your local banks make their living from renting out money at “interest”, plus various “costs”. The picture of a lady saying gleefully, “I'm so lucky! I got the loan! The bank gave me a loan!” should instead be the banker saying gleefully, “I sold a loan! I sold a loan!”

*Shakespeare, Hamlet. “Husbandry” in Shakespeare's time meant domestic management, thrift, or frugality.
Posted by Fleming at 9:53 AM No comments: