THE LOST ART OF SAVING 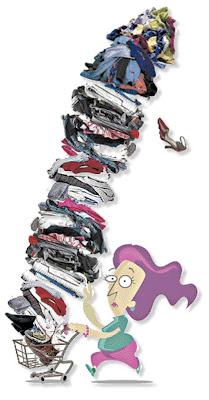 I am old enough to remember when there was not a single credit card in all of America. You don't believe me? I'm not surprised. With your government frantically doing everything possible to persuade you to go deeper in debt via credit cards and other loans, you might well ask if this country ever survived without massive debt on all levels.

The first credit cards went into general use with the American Express card and the Bankamericard (now Visa) in 1958. Credit cards freed “consumers” from having to pay for things at the time they bought them and to delay the day of reckoning indefinitely as long as they met the payment demand each month while the cost of their purchase was grossly inflated by hefty interest rates. Thus instant gratification was introduced into the American bloodstream with the approximate disastrous effect of the forcible introduction of opium into China by the British in the 19th Century.

Add to credit cards the wild promotion of borrowing money secured by a car or a house which the lender could take if you didn't pay, and the US was ripening for economic catastrophes.

BY 2007, BORROWING WAS AT NEW HIGH LEVELS


But, you ask, in the Dark Ages before 1960 did no one buy Christmas presents? Did no one own a car or go to college? Ho, ho, ho! Of course they did. There was something called “saving” in order to pay something later. There was even an atypical system, little used today, in which the bank would pay you interest to place money in a savings account – so that the bank could lend the money to others (maybe even you) at much higher interest.

Watch some old movies and you will see how your ancestors “saved up” to buy things – scrimping and putting coins in a jar until the day they could buy that fancy dress or that doll or that 40 acres. What terrible times, thankfully gone along with dentistry without anesthetics. Now you take home that dress or bicycle today and have the rest of your life to pay for it at double the cost compared to a cash purchase.

In those olden days before credit cards, when it was generally felt that borrowing money was something shameful or dangerous, there was a prominent feature of advertising during the weeks before Christmas called The Layaway Plan. The shopper gave the store a small downpayment on the merchandise, which was then held for the buyer, who made periodic payments until the great day when the bicycle or diamond ring was fully paid for and taken home. There was a small service charge, but it was nothing compared to compound interest on borrowed money. The worst that could happen if one failed to make the payments was that the money would be refunded minus the service charge and a cancellation fee.

So, why is our government not encouraging a debt-free population? Why is it not touting savings instead of the borrowing that has caused the financial collapse of the world? Who benefits from undisciplined borrowing? Who gets richer the more you go into debt?

Class, if anyone can't answer that question, please leave the room and max out all your credit cards in a Christmas shopping binge. No need to save up for that television set or Nintendo Wii that you can't afford. Just take it home today and worry about paying for it next year.