The Case of the Missing Rabbis 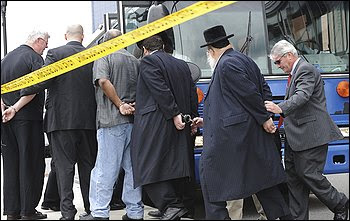 “The Washington Post, NEW YORK, July 23 -- A two-year federal probe into a money laundering operation taking place between the New York area and Israel ballooned into one of the biggest bribery and corruption sweeps in New Jersey history, netting three northern New Jersey mayors, two members of the New Jersey Legislature, a raft of local officials, five rabbis, and a Brooklyn man accused of trafficking in human kidneys, U.S. prosecutors said today.
“FBI agents arrested 44 people in a series of morning raids, creating a dramatic scene of politicians and rabbis in traditional outfits handcuffed and being marched into the federal building in Newark, and then boarded onto a bus for the drive to the federal courthouse.”
“The arrested rabbis included Saul Kassin, the chief rabbi for the tight-knit Syrian Jewish community in the United States, and the chief rabbis of synagogues in Brooklyn and Deal, N.J. “

Doesn't that seem like a story that would be relished by American television? Dozens of prominent politicians paraded in front of cameras on their way to jail, juicy eye-catching pictures of handcuffed rabbis sporting black hats, long coats, and pigtails? I expected it to be the featured story on the evening news, but I looked in vain.

Now, class, can anyone tell me why the tale was overlooked, or dare we suggest suppressed, by the usually scandal-hungry media? Hint: Note the words “Israel” and “rabbis”.

I laughed when I learned that some published accounts referred only to “religious leaders”. You can be sure that if the “religious leaders” were Christian evangelists or Roman Catholic priests we would have seen them identified as such and pilloried on every evening news program in the United States. 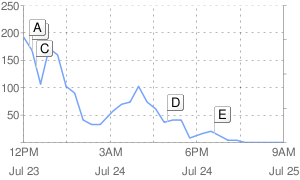 Courtesy of Google, we can see how journalistic excitement over this story grew!
Posted by Fleming at 6:36 AM